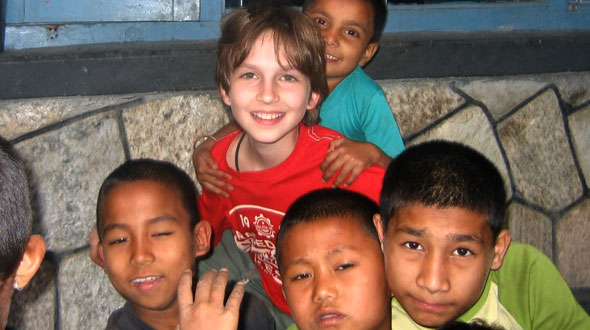 For my  12th birthday in April I went to Nepal for two weeks to stay with  Kira Kay an adult friend of mine.

Our plan was to  visit some of the self-sustaining Orphan Homes established by Hands-with-Hands  organisation. The first one was in Pokhara, then we drove 4 hours south to  Chitwan to visit the second one. From there we drove another 6 hours to Itahari were we were planning to build another orphan home. After this we went  on a long 11 hours drive to get back to Kathmandu. In Nepal the smallest bit  of road can take the longest time if it has to wind up a mountain. There we  visited the Bakthapur and Phutong orphan homes.

The scenery in  Nepal is really cool, because you can be at a really sunny and nice area at a  lake and look at the snowy tops of very high mountains.

I really enjoyed in Nepal that there is such a strong community and everybody knows  everybody. I love that you are never alone, you can just go to your neighbour  and have a cup of tea with them and you don’t have to worry about something could get stolen because everybody takes care of everything.

I am really  grateful that at home in London I can drink the water from the tub, because if  you do this in Nepal you get seriously sick. Also the toilets are squatting  toilets, that means it’s a hole in the ground which you squat over – I did not  like this! In the towns I have been to all the rubbish just stays on the  streets and gets thrown into the river; that stinks and does not look pretty  and I think for the environment it is not very good  too.

One of the  things I really enjoyed very much was playing with the children at the orphan  homes. They are great people and we had a lot of fun. Even though they could  not speak English very well we could still understand each other. They taught  me a few Nepali games and I taught them a few western games. One day we went  down to the river and in trying to catch a fish one boy was bitten by a leach.  He took it off and held it in his hand and it sucked itself to his hand. I  thought it was really cool that he did not freak out about it, but just pulled  it off and threw it into the river.

We also had a  really nice ride on an elephant in the Chitwan jungle. After the ride we took the elephant to go bathing in the river nearby. This was not only the elephant  bathing but also us! We were sitting on him and he threw us off his back and  squirt us with water from his trunk. I loved it!